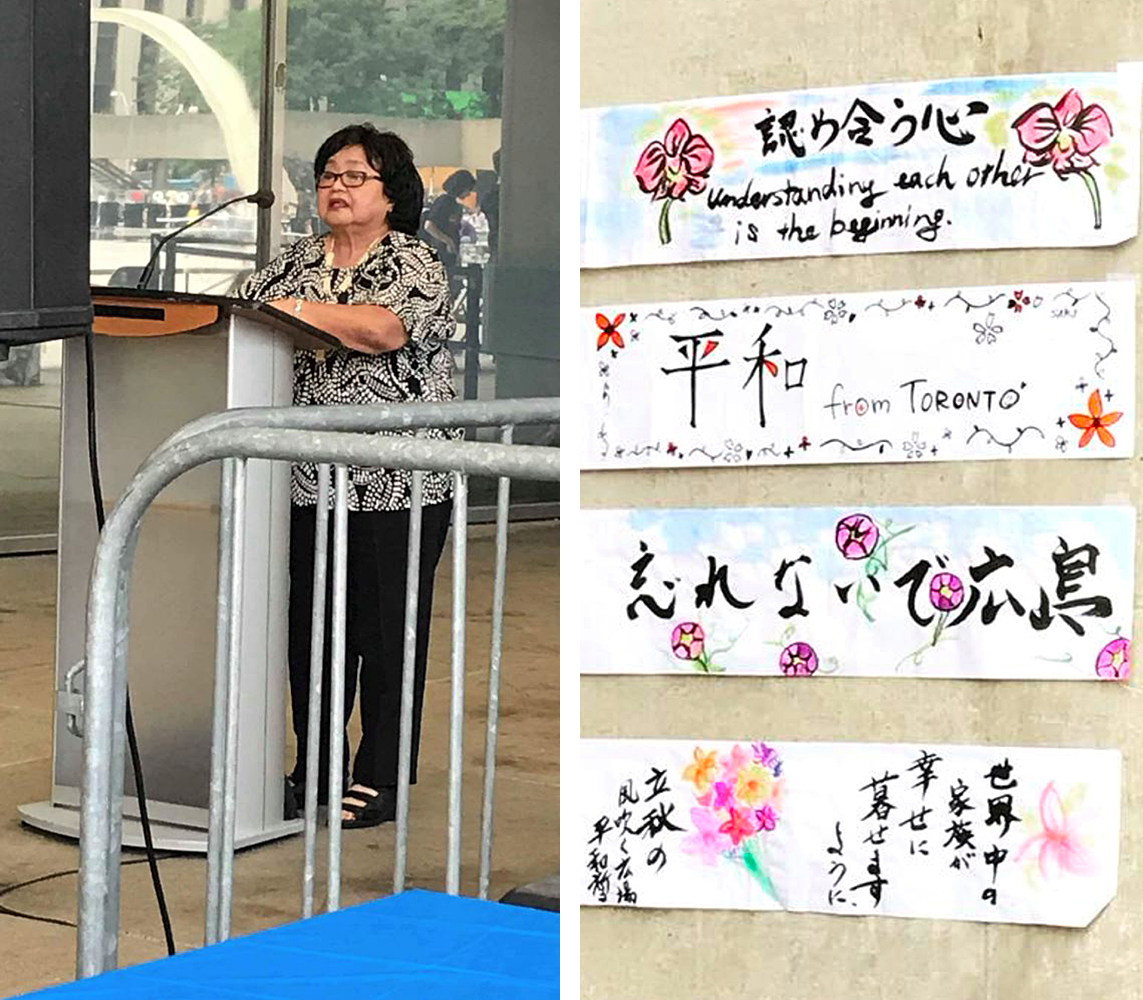 On the 5th of August 2018, I went to The Japanese Canadian Cultural Centre. At the Peace Garden at Nathan Phillips Square on the next day. I saw Setsuko Thurlow speak over the next 2 days. She was born in Hiroshima on January 3rd, 1932 and she survived the atomic bombing of Hiroshima when she was a young school girl.

“She shares her experiences to put a voice and a face to the powerful, destructive force of nuclear weapons. An active campaigner, Setsuko played an essential role with the International Campaign to Abolish Nuclear Weapons (ICAN) and in the 2017 United Nations nuclear ban treaty negotiations that led to the adoption of the Treaty on the Prohibition of Nuclear Weapons on 7 July 2017. In accepting ICAN’s 2017 Nobel Peace Prize alongside ICAN’s Executive Director Beatrice Fihn, Setsuko represented the voice of the Hibakusha and their decades of advocacy to rid the planet of nuclear weapons. HIBAKUSHA are the survivors of the atomic bombings of Hiroshima and Nagasaki.” [HIROSHIMA NAGASAKI DAY Pamphlet page 3]

On the 5th of August, I watched a NHK Documentary Screening called “Setsuko Thurlow’s Quest: A World Without Nuclear Weapons”. On the 6th of August 1945, she stated that it was a hot morning, when suddenly there was a massive flash. Many buildings started to collapse and she almost died but a man kept telling her “Walk towards the light!! Move forward!!” She was saved thanks to him. She saw people who held their eyes in both hands and kept looking for their family and companions. Many people were killed like insects and she tried not to walk on the dead. My mother told me that my great-grandfather saw a horrible sight much like that too, he saw people with their skin peeling off their bodies, others dived into the river in search of water. It was the cruelest sight, which I couldn’t ever have imagined.

After I watched the screening, I was able to speak to her a little, one-on-one. The moment I stood in front of her, I had goosebumps. The moment she shook my hands firmly, immediately I felt her strength.

On the 6th of August, I listened to her statement “The Beginning of the End of Nuclear Weapons”. There were many Canadian and Japanese people there and signs with slogans that appealed for peace. She said, “With great conviction I declared nuclear weapons have always been immoral, now they are illegal. This is the beginning of the end of nuclear weapons. Let us move forward together and change the world.” These words were the most impressive for me. She didn’t suffer a setback even when she was told by Americans to return to Japan, and kept appealing for the prohibition of nuclear weapons for the whole world. I was extremely delighted to come to Toronto to study abroad as a foreign student. The honor to meet her was more than I deserve. I was born in Hiroshima as she was too. I will never forget her speech and I would like to propagate it to others who may otherwise never know her story.

＜PROFESSOR’S VIEW＞
Ms. MASUMOTO reported a commemorative event which was held in Toronto on the 73rd anniversary of Hiroshima bombings. Her report provides us the importance of Anti-nuclear movement in the world. International Campaign to Abolish Nuclear Weapons, international NGO, was awarded the Nobel Peace Prize for 2017 last year. Ms. Setsuko THURLOW has been working as a peace activist of ICAN. For us Japanese, we have already recognized the total insanity of nuclear weapons. I suggest that we need to take an action to establish a new moral code for people to follow.